After going through both the SAMC21 and the SAME70 family CANBus peripherals in some designs. Here are some lessons learned.

Atmel did not design the peripheral. They licensed Bosch’s “M-CAN” peripheral IP and put it into the chip. There is absolutely nothing wrong with this and what better than using the silicon design from the vendor that also creates the CANbus spec? They appeared to license it to gain CAN-FD capability.

The documentation however does suck a little on this peripheral. It is a little complicated and Atmel just copy and pasted the Bosch documentation into their datasheet rather than writing it themselves so the style of documentation doesn’t match their normal one.

The peripherals are identical between the two families. However because Atmel has one code style for the M0s and a different code style for M3/M4/M7s. The header definitions for the peripherals use different naming conventions and patterns. The ASF library has less differences but they did do the silly thing of prefixing it “mcan” in the M7 and making it just “can” for the M0.

The INIT flag and errors

The peripheral has an INIT flag. On power-up its “1” which means it is awaiting initialization. You would configure the peripheral and then clear the bit which allows it to run. You would think INIT is its only use….nope!

In CANBus, there is a system of rules to track transmit errors within each CAN device. The end result is if there are enough errors, the peripheral should go “Bus Off” where it stops transmitting.

Bosch decided to implement Bus Off by making it set the INIT flag back to 1.

To continue using the CANBus, you must clear the flag again. But you don’t have to reconfigure the peripheral! No delays are needed too as the peripheral will automatically perform the Bus Off recovery sequence per ISO 11898-1:2015 specification.

Software initialization is started by setting bit MCAN_CCCR.INIT, either by software or by a hardware reset, when an uncorrected bit error was detected in the Message RAM, or by going Bus_Off.

There is unfortunately no way to just tell it to keep chugging along and automatically reinit. So a check somewhere in the micros loop or interrupt is required.

Its in the Errata but worth mentioning because it can be a big deal if sleep current consumption is a big deal. The peripheral is unable to wake the SAMC21 if in standby. It can wake the micro in the other sleep states.

The ASF driver for the peripheral works but its a little painful to figure out from the cryptic naming convention of registers. There is a lot left to be desired in the implementation provided in the form of missing functions and extensions :/

Configuring the clock rate on the SAME70 is messier than on the SAMC21.

By default, the system clock feeds the peripheral via PCK5 (peripheral clock 5). This may make configuring the CANbus baud rates strange as your system clock can be a wide range of values which you need to divide down into time quanta. ASF makes the decision to switch it to PLLACK by default (the internal system PLL).

However you can switch it to the UPLLCK which is the fixed USB 480 MHz reference clock. This is done by changing the peripheral clock setting in PMC_PCK5 register using the CSS field to UPLL_CLK. 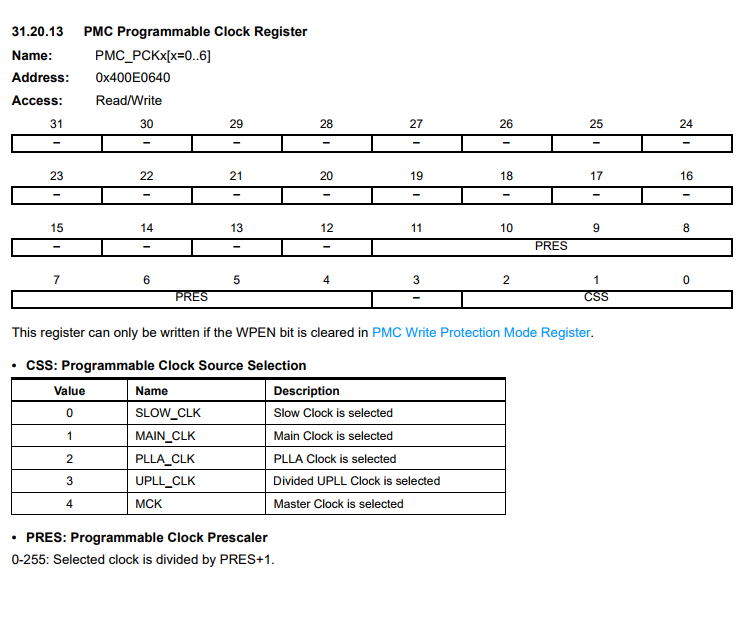 On top of this, you will want to divide down the reference clock further by using the PRES portion of the PMC_PCK5 register.

The issue with ASF is there are no handy defines you can change to configure PCK5 in one predefined spot. In fact, because they manually set the reference clock to pllack you have to edit the ASF driver to fix it.

If you want to use UPLLCK, you need to modify the ASF driver and use

with the desired prescalar value as the second arg. Note, the arg is -1 from the actual prescalar result, the macro unfortunately doesn’t do any nice math to hide that part.

Clock configuration in the SAMC21 is more straight forward. You configure a GCLK for the reference clock and set the peripheral to use it like any other Atmel M0 part. The internal 48mhz oscillator makes a perfect reference for the peripheral off the bat.

Configuring the baud rate in for all families is where things get more annoying in ASF.

When you create the project. A config/conf_mcan.h file is created with these defines:

You may assume this is how the canbus baud rate is configured…yes and no. The above defines are used for default baud rate configuration when mcan_init is called inside _mcan_set_configuration.

The driver also comes with a mcan_set_baudrate function which conflicts with the #defines above. It contains hardcoded time quanta settings and attempts to just adjust the baud rate prescalar to make the hardcoded quanta settings work. This could be fine in very simple use cases but the reality is you really want to customize the quanta settings to your design.

So how do we fix this mess?

Does this mean we have to do some thinking ourselves on the proper segment widths? Yea…but that’s the entire purpose of the quanta settings! You are meant to tweak them to the application. CANopen for example prefers a SJW value of 1 and sample point at 87.5% . NTSEG1 and NTSEG2 should get adjusted for transceiver propagation delay, etc.

Does this mean we can now use mcan_set_baudrate liberally? No. You have to deal with the Configuration Change Enable system of the peripheral. It’s a secondary bit that turns on/off configuration and protects the settings from inadvertent changes.

To actually change the baudrate you must

You could combine this procedure into the custom mcan_set_baudrate like so:

Suffers from the same problems above as the SAME71. The tweaks are basically the same except for the different defined register names.

The peripheral actually has a few of operation to send and receive CAN messages, in fact the modes can be configured differently for RX and TX. It is up to the particular application to pick the ideal mode of operation. One mode is buffer mode which is akin to the “mailboxes” of the SAM4E,SAM3X and older Atmel micro implementations of CAN, where you have dedicated memory spaces for particular sets of messages to RX and TX from. The other mode is RX/TX FIFOS and TX queue (you can mix and )

One of the most basic modes that there is no example provided for is using FIFOs as RX and TX queues.

Queue has these particular advantages:

For convenience an example project targeting the SAMV71 can be found here: SAMV71 CAN Queue Example

It would be the same exact code for the SAME70 and the SAMC21 would require some porting.

First lets alter config/conf_mcan.h to the below defines

The purpose here is to disable the buffer allocation in the ASF driver and maximize our queue size. Why is FIFO1 the only one configured for the QUEUE?

No particular reason other than Atmel examples used FIFO0 for standard messages and FIFO1 for extended, but the hardware doesn’t have any restriction.

You can see the implementation is very simple and will allow you send and receive messages rather lazily.

Again, this is purely an example. Every application has a different need, sometimes you don’t care about tossing messages out because your queue is full and sometimes you do want to error handle that situation.